Well, I finally did it.

Many-a-years in the making and I published What it Took to Realize/ Voodoo in paperback and for kindle thanks to Createspace and Amazon’s wonderful self-publishing programs.

Please check it out, inspired of course by Alexz Johnson and her amazing song Voodoo. 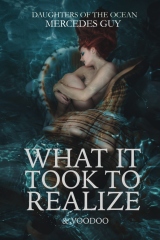 What It Took To Realize
Morgan never really fit in at school. Besides her abnormalities due to the fact that she was half-human half-mermaid, she was the school’s biggest outcast. Her number one tormenter being the head cheerleader and a pixie. Other than being a mermaid who lives with her water-nymph guardian and trying to keep it a secret in a school of mortals and mythical creatures, she lead a pretty uneventful life. That is until Leroy, the school’s hot new quarterback and vampire, asks her out on a date. Suddenly life is becoming more complicated and all the new events in her life raise up old questions like: Who are her parents? Where did she really come from? What’s up with the nightmares? And why is the new girl, Emmaline, being so friendly?

Voodoo
She is immediately drawn to Morgan the moment she sees her reflection in the review mirror of her Volkswagen Beetle. “Voodoo” by Alexz Johnson was playing over her radio, and if not for Ginger’s whining, it would have been a movie-made moment. Emmaline doesn’t think much of it the first time “Voodoo” begins to take control of her stereo, but when she begins to hear the song every time Morgan is around, she knows it’s no mistake. Pretty soon she learns her and Morgan are destined; that she is destined to save Morgan, but how or from what she has no idea. How is she going to save Morgan if she doesn’t know what she’s up against? As she gets closer to Morgan will she be able to control the desires to be with her?